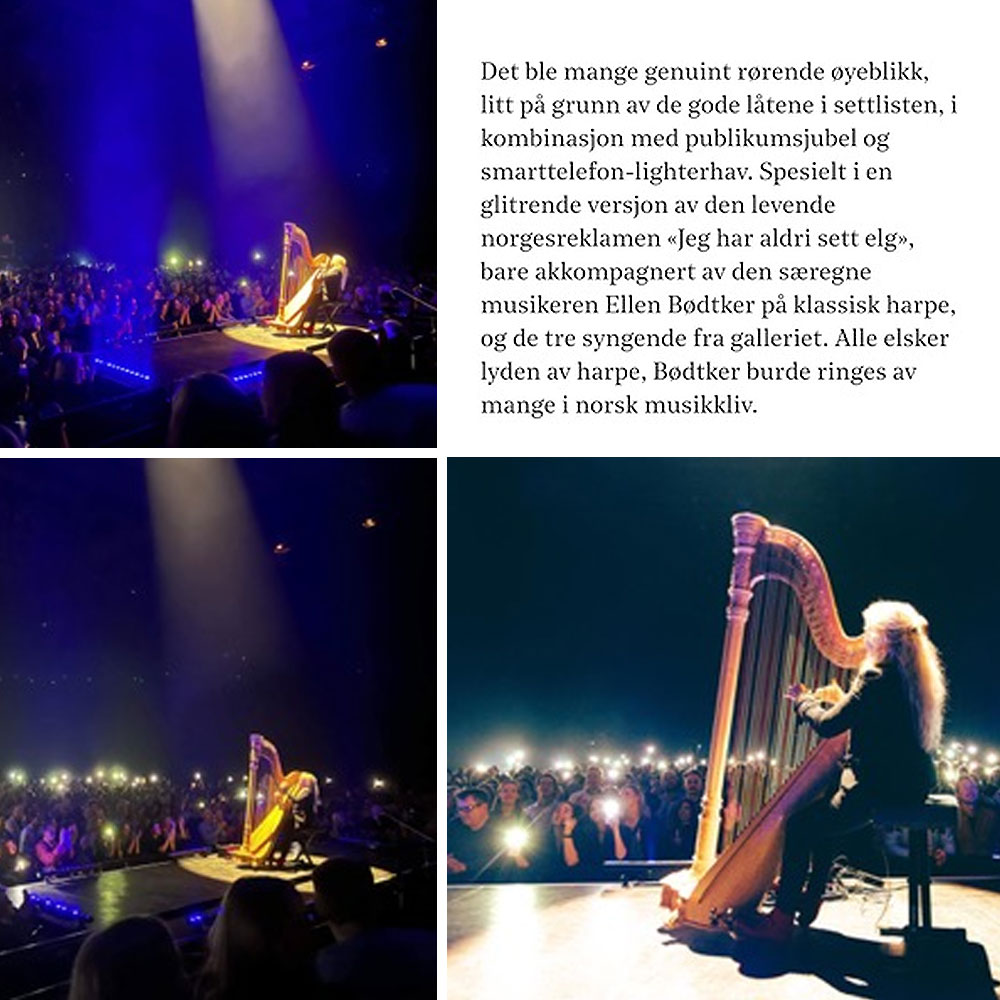 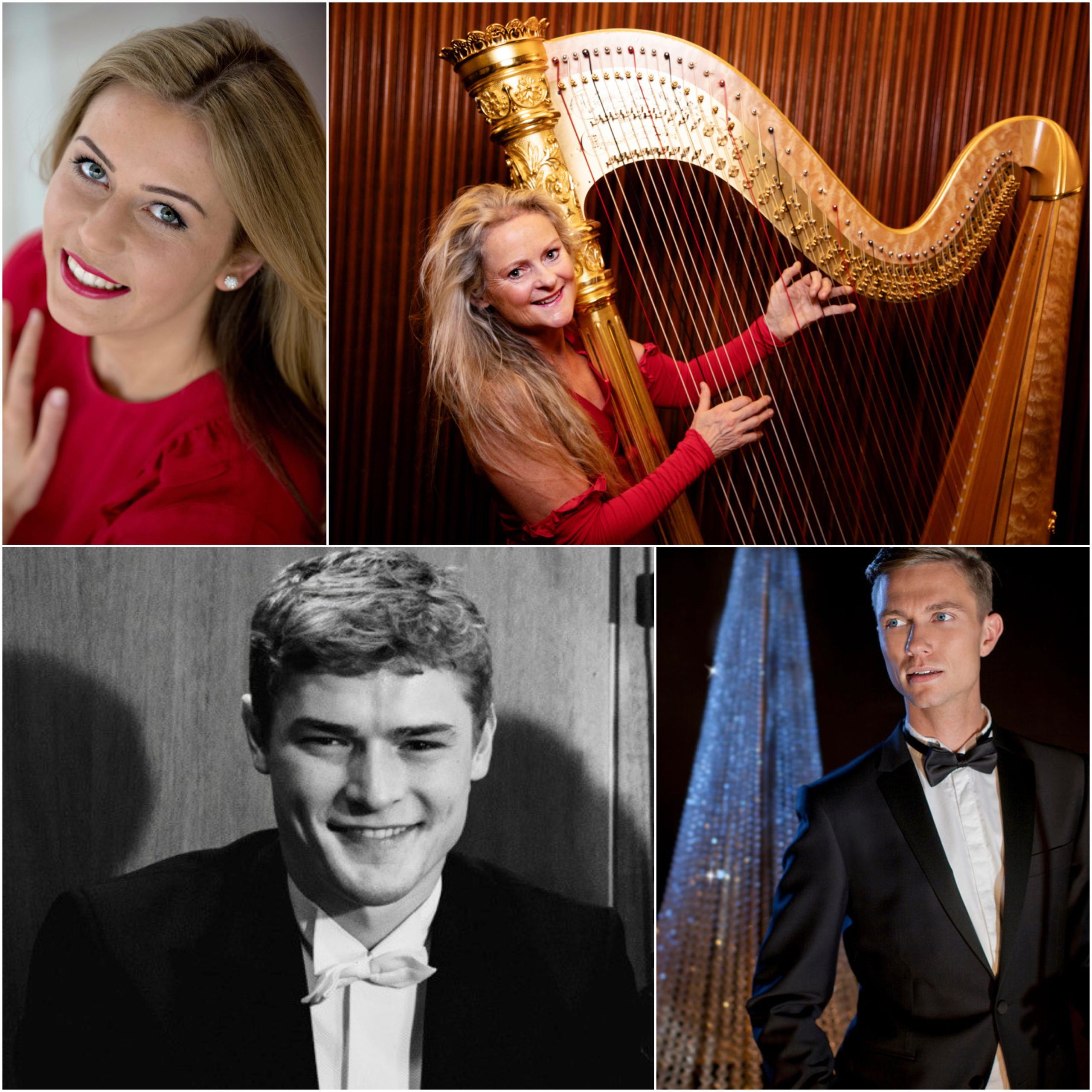 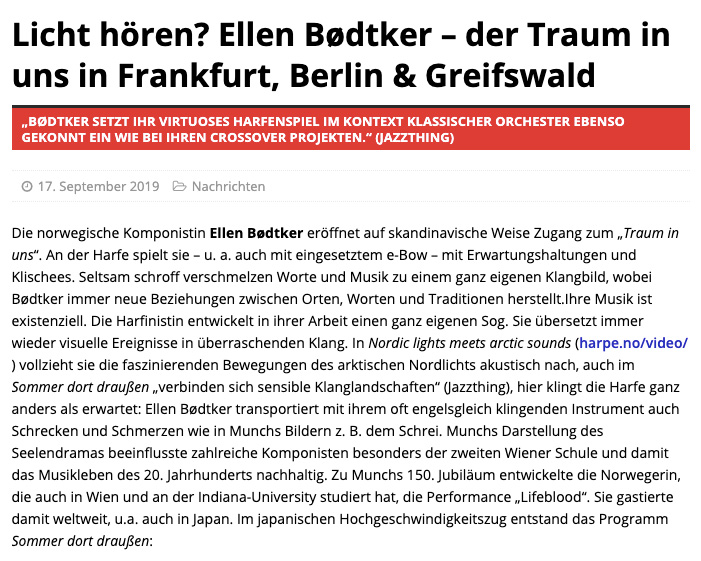 CRESCENDO in Germany writes about the upcoming Concerts. 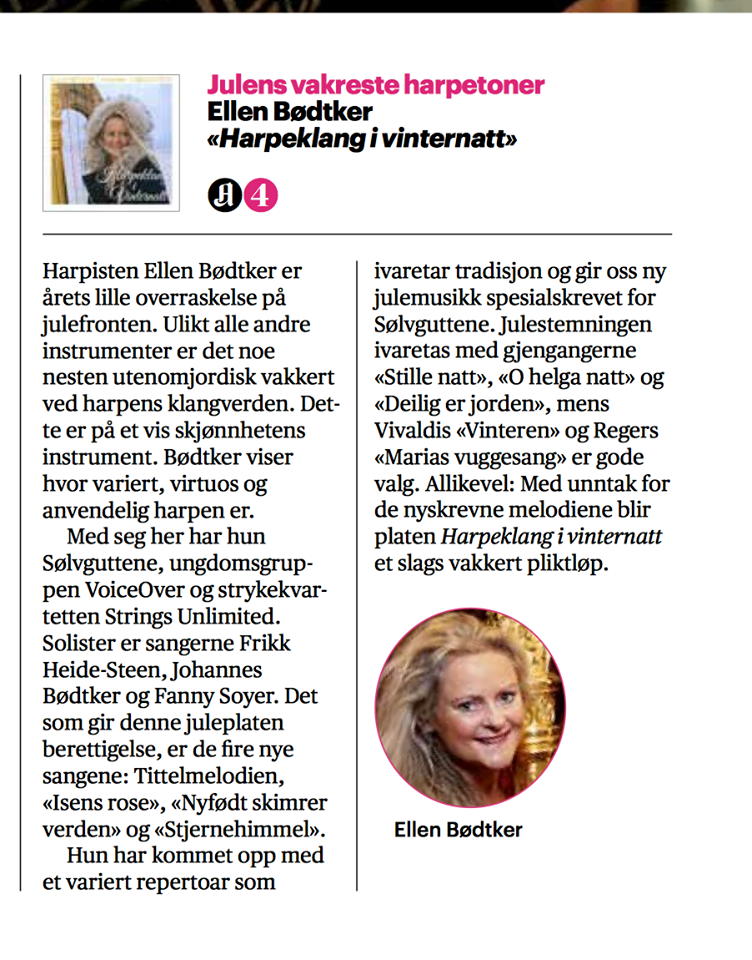 This Christmas’ most beautiful harp music.

Ellen Bødtker is this year’s Christmas surprise. Unlike all other instruments, the harp has an ethereal beauty. Bødtker shows how colorful, virtuous and applicable the harp is.

She is accompanied by Sølvguttene, VoiceOver and the string quartet Strings Unlimited. Soloists are Frikk Heide-Steen, Johannes Bødtker and soloists from the Sølvguttene. 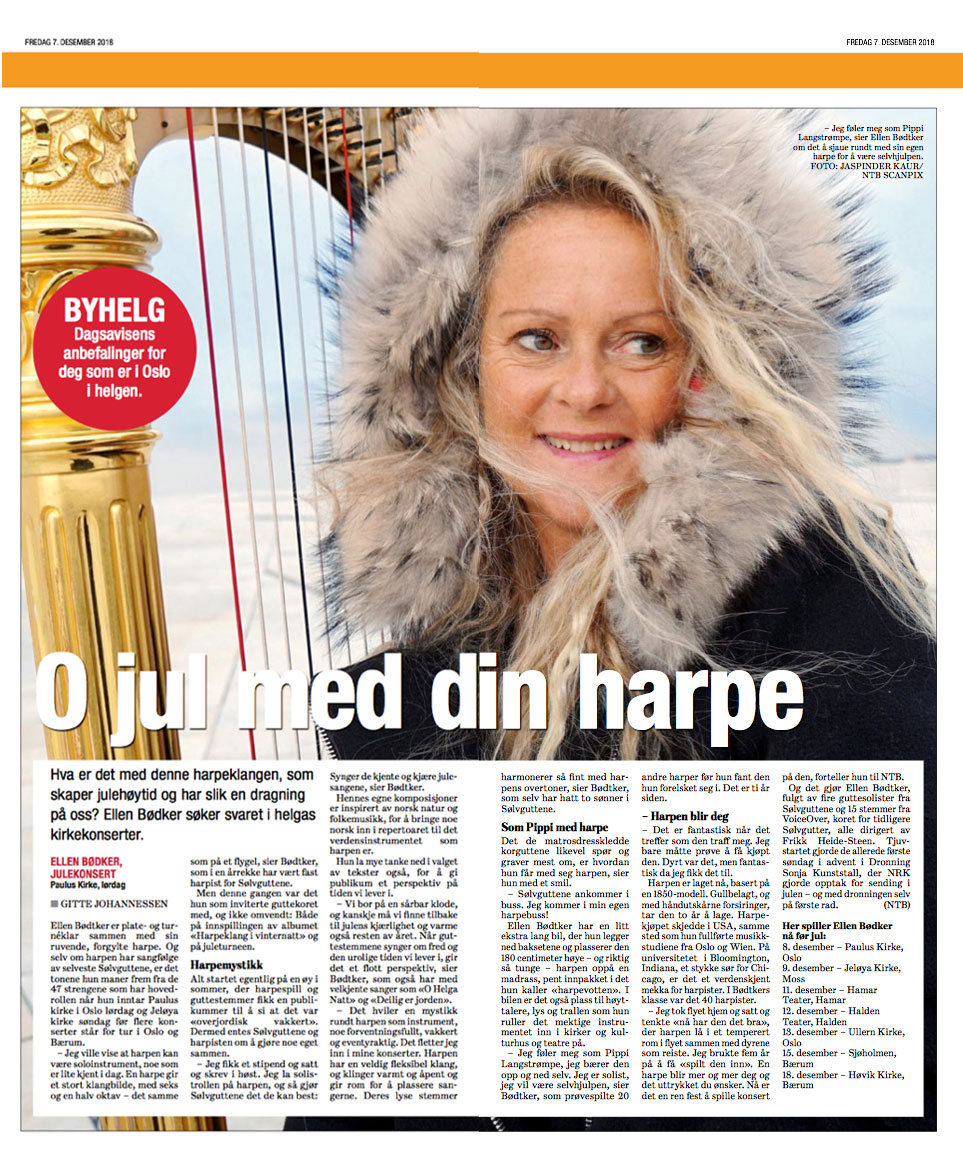 Why does the harp put us in the good moods of Christmas? Ellen Bødker is looking for the answers through her music at the church concerts this Christmas. 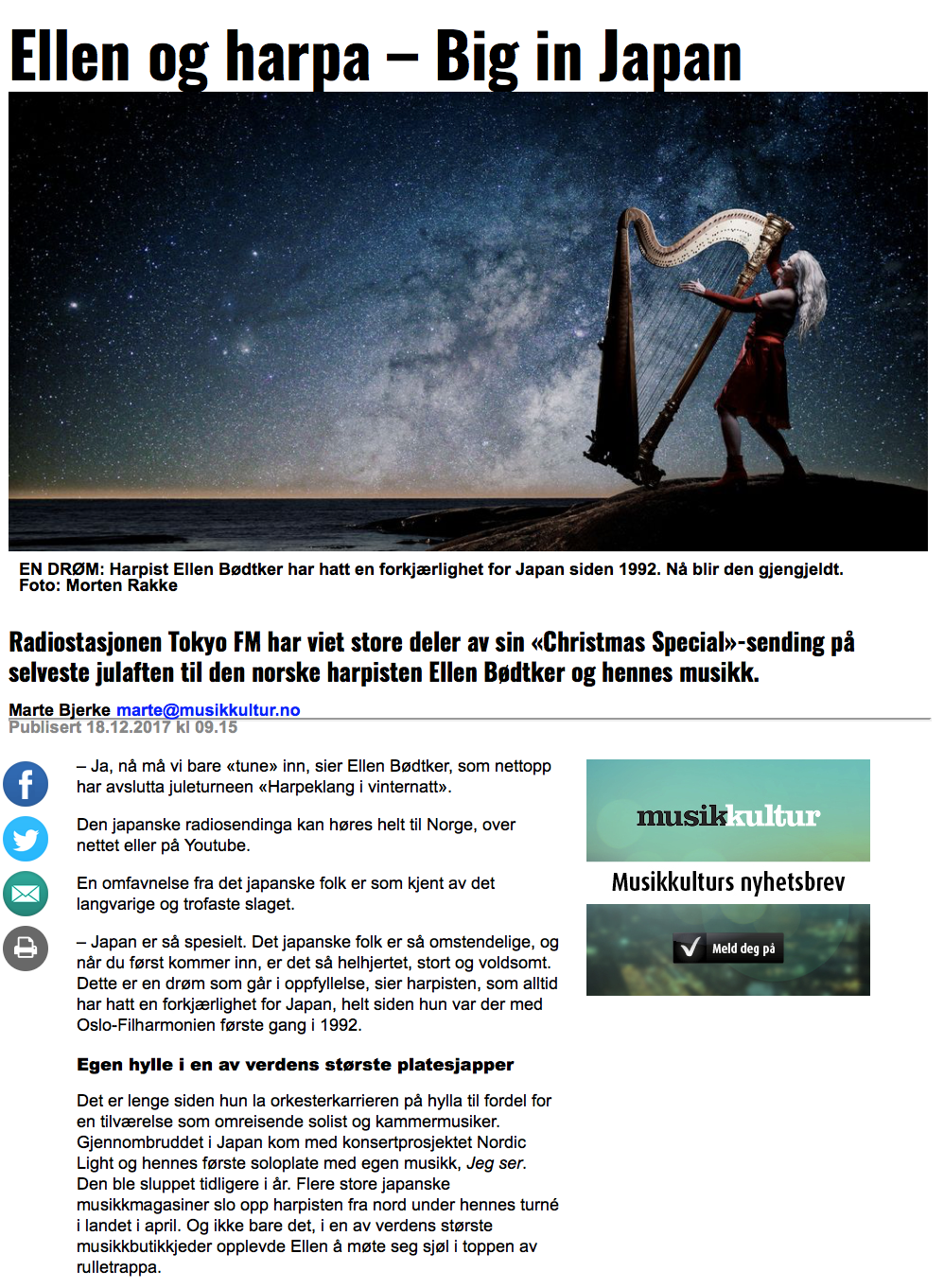 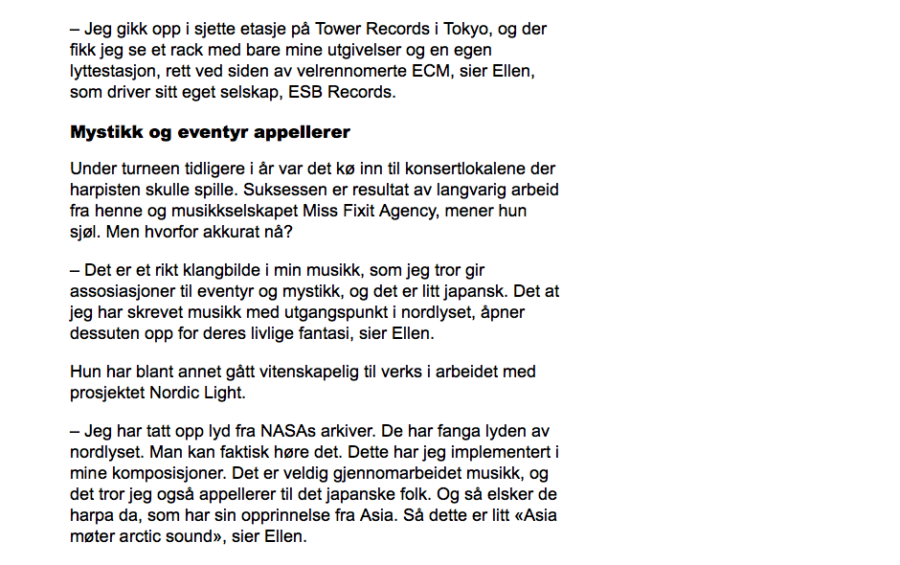 Ellen and the harp – Big in Japan

The Japanese radio station Tokyo FM has largely dedicated their «Christmas Special»-broadcast on Christmas Eve to the Norwegian harpist Ellen Bødtker and her music.

The radio broadcast can be heard all the way over to Norway via online streaming and YouTube.

An embrace from the Japanese audience is of the long-lasting and loyal variety.

– Japan is so special. The Japanese people are so circumstantial, and when you first enter their market it is so wholehearted and grand. This is a dream come true, says the harpist, who has been in love with Japan since she first visited with Oslo Philharmonic Orchestra in 1992.

Her breakthrough came with the project «Nordic Lights» and her first solo album of self-composed music «I look», released earlier this year. Several large music magazines in Japan covered the harpist from the north during her tour there in April. She also experienced seeing her self at the top of the stairs in one of the worlds largest music chains in the world.

– I went up to the sixth floor of Tower Records in Tokyo, and there I saw a rack of my own music and a dedicated listening station, right next to reputable EMC, says Ellen. 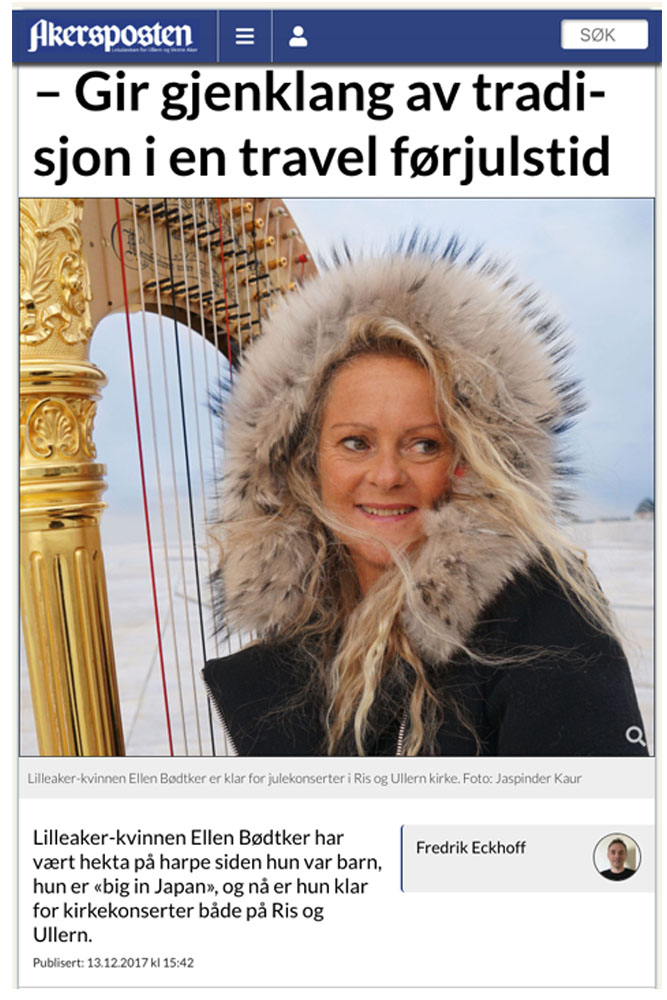 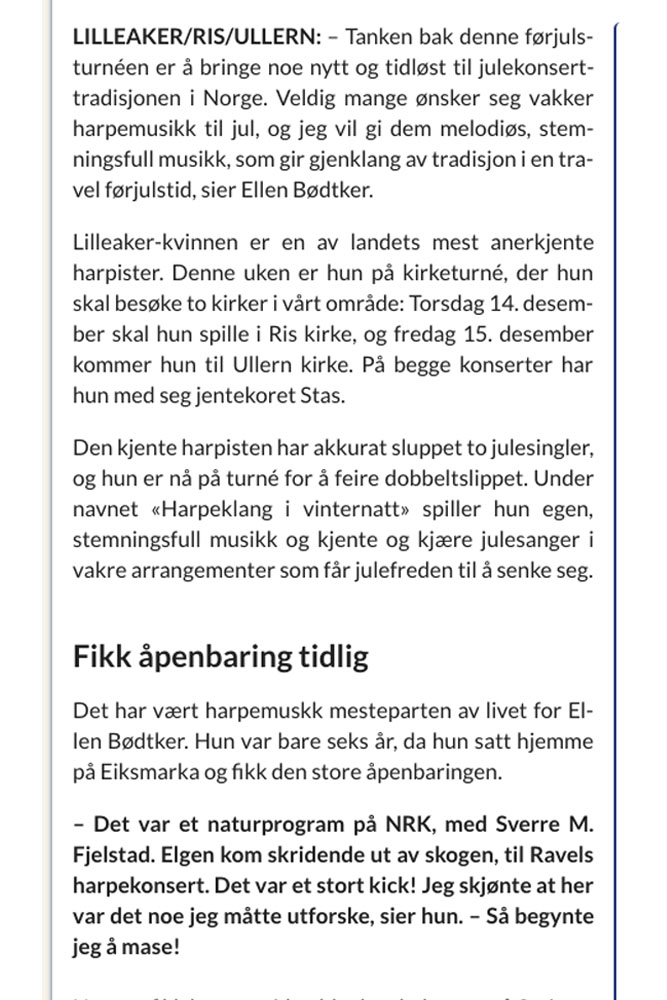 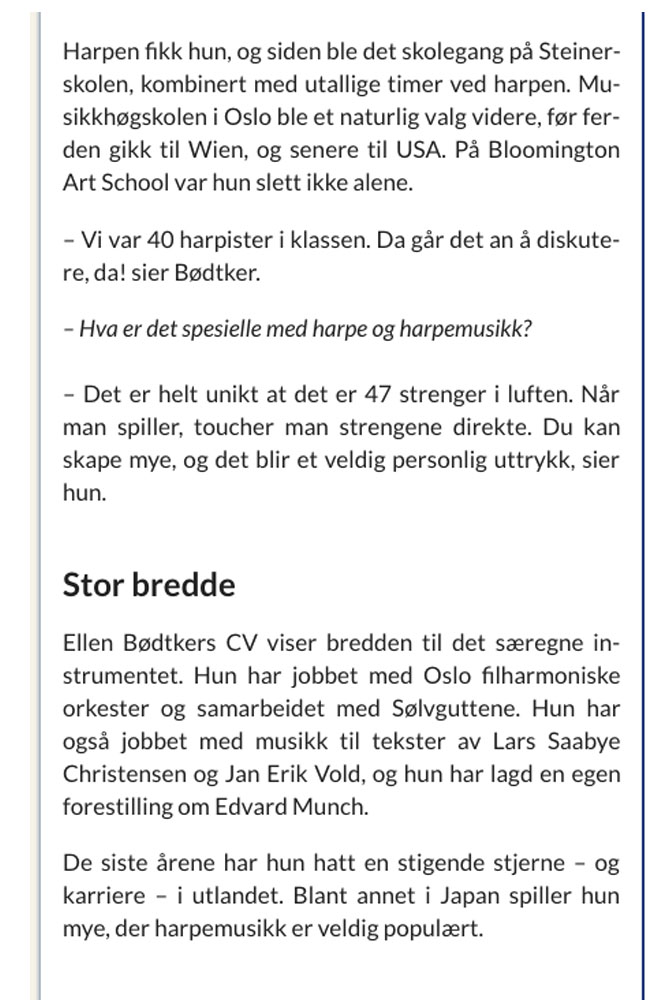 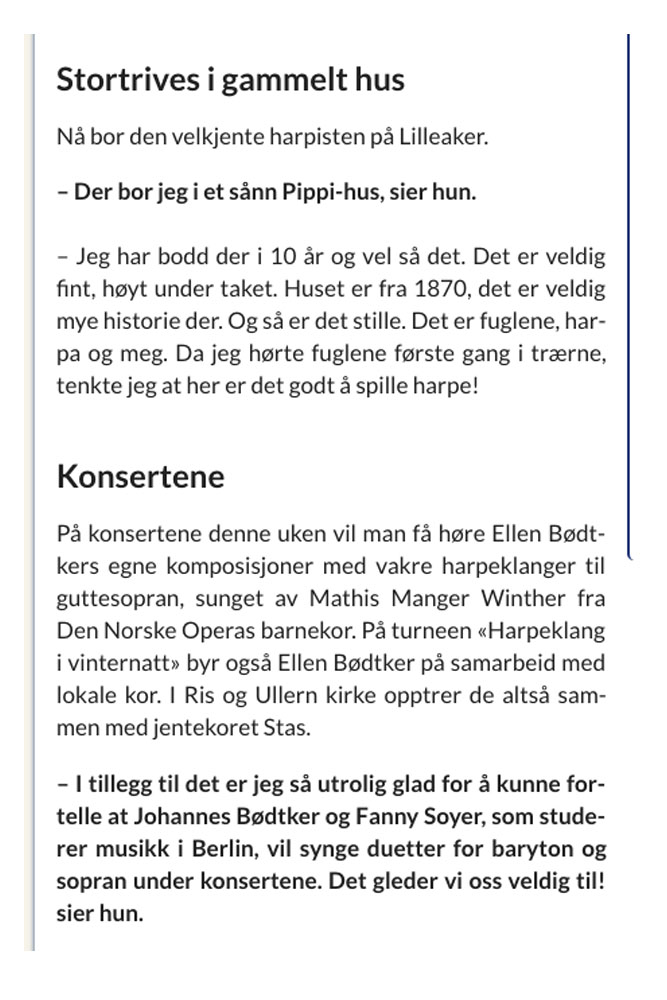 The echo of tradition through a stressful Christmas time

Ellen Bødtker has been hooked on the harp since childhood. She’s «Big in Japan» and now she’s ready for church concerts at Ullern and Ris.

– The idea behind this Christmas tour is to bring something new and timeless to the tradition of Christmas concerts in Norway. A lot of people want beautiful harp music for Christmas, and I would love to give them melodic, evocative music, that echoes tradition in a stressful time before Christmas.

The well-known harpist has released two Christmas singles and is now touring to celebrate the double release. Under the name «Harpeklang i Vinternatt» she plays self-composed  music as well as the familiar Christmas tunes we love. Her beautifully composed music bring us into the moods of Christmas. 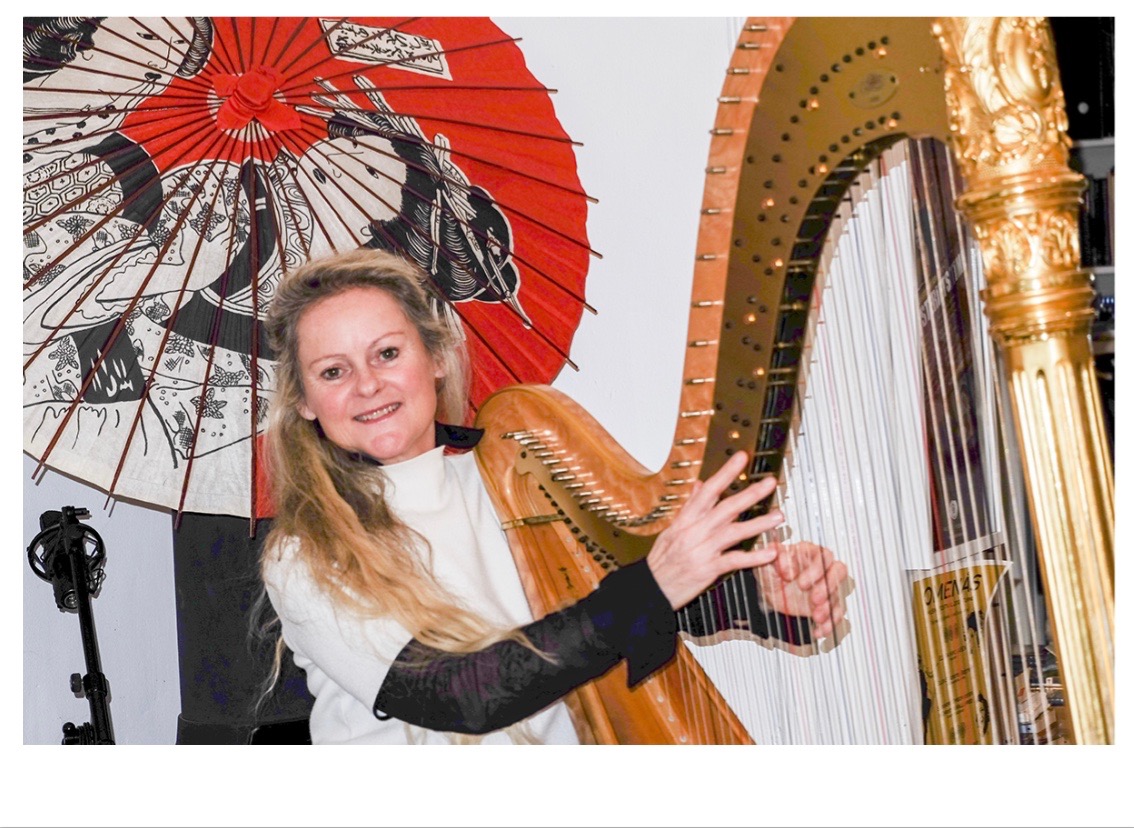 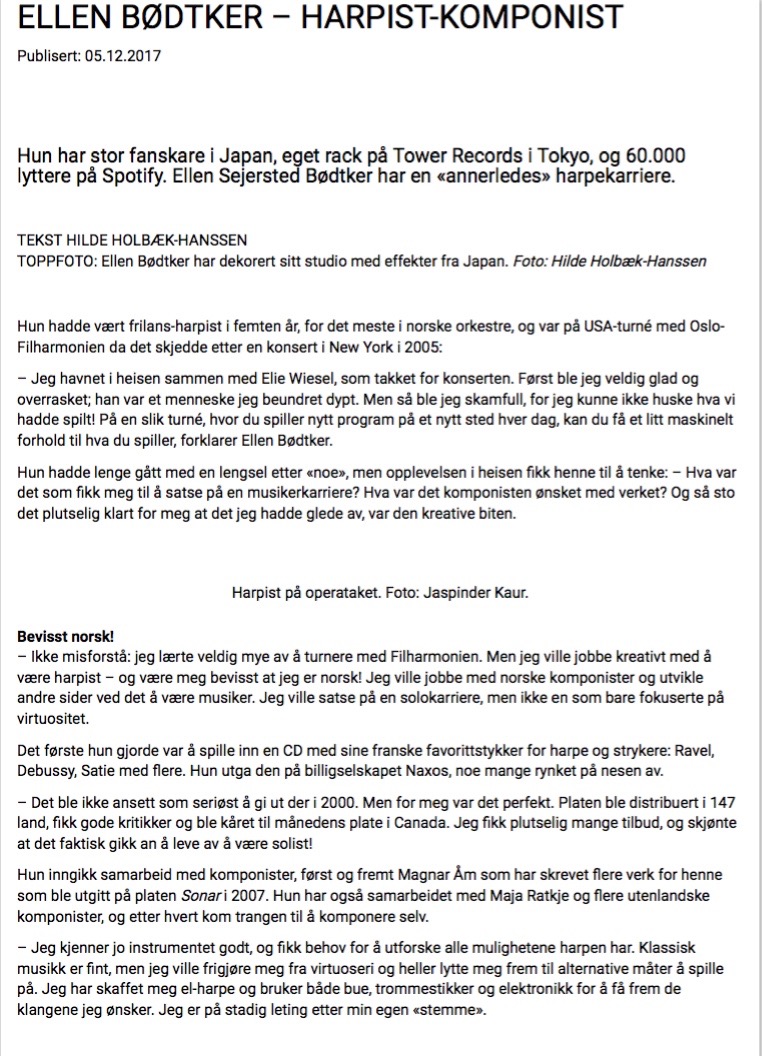 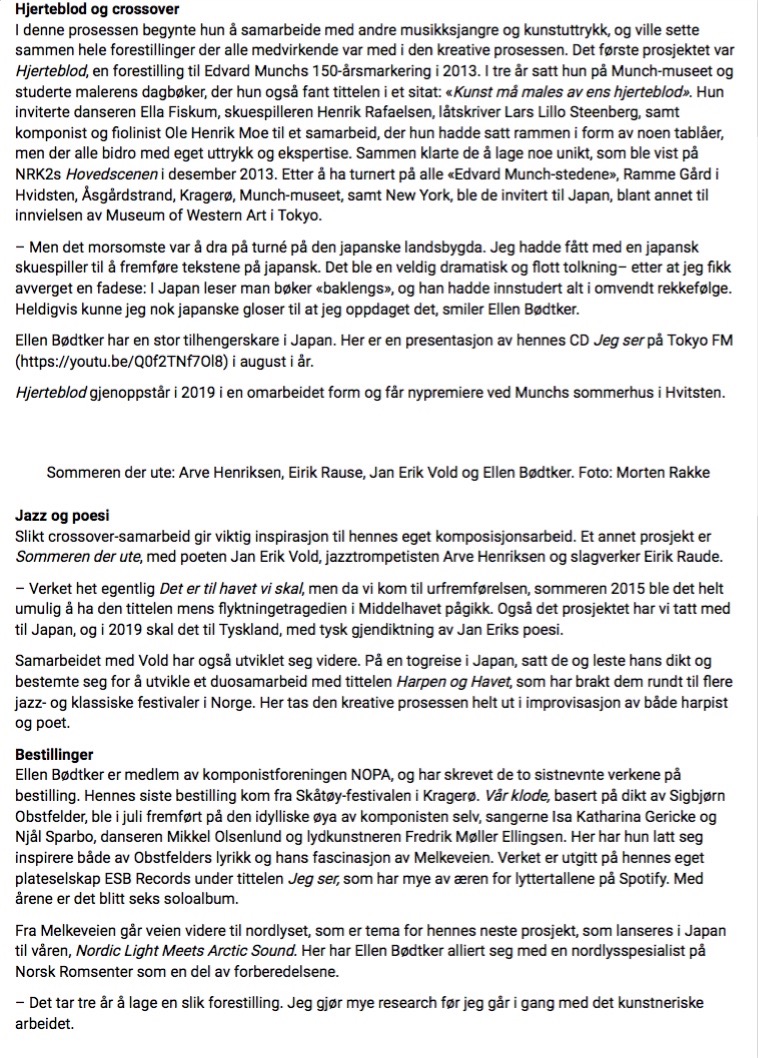 She has a big fan base in Japan, her own rack at Tower Records in Tokyo, and 60.000 listeners on Spotify. Ellen Bødtker has a «different» harp career.

She had been a freelance harpist for 15 years, mostly with Norwegian orchestras, and was touring with Oslo Philharmonic Orchestra in New York when it happened:

– I was in the elevator with Elie Wiesel, who thanked me for the tonights concert. At first, I was very happy and surprised, he’s a person I admire deeply. But then I became shameful, I couldn’t remember what we played! On a tour like this, where you play a new place and a new repertoire every day you become mechanical about your playing, Ellen Bødtker explains.

She had been longing for something for a long time, but the experience in the elevator made her think: – What made me pursue a career in music? What did the composer want with this piece? And then it was clear to me, what I enjoyed was the creative part of the music life.

Don’t get me wrong: I learned a lot by touring with Oslo Philharmonic Orchestra. But I wanted to work creatively with being a harpist – and be conscious of my Norwegian identity in my music. I wanted to work with Norwegian composers and develop other aspects of being a musician. I wanted to pursue a solo career, but not one that only focused on virtuosity.

One of our time’s most acknowledged harpists Ellen Bødtker is to release not only one but two singles on Friday, December 1st. To celebrate the double release she goes on tour this Christmas with «Harpeklang i Vinternatt».

– In addition I’m pleased to announce that Johannes Bødtker and Fanny Soyer, who are both studying music in Berlin will perform duets for baryton and soprano at the concerts. We are really looking forward to that! 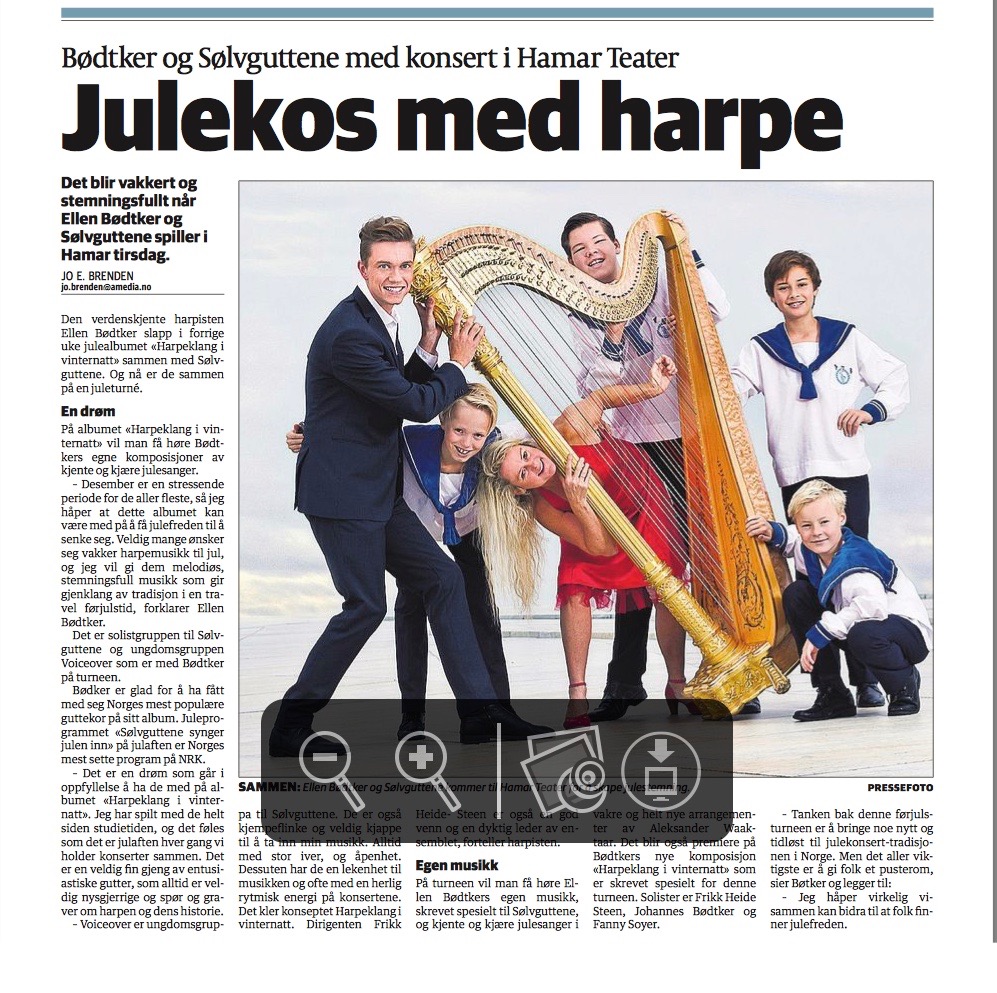 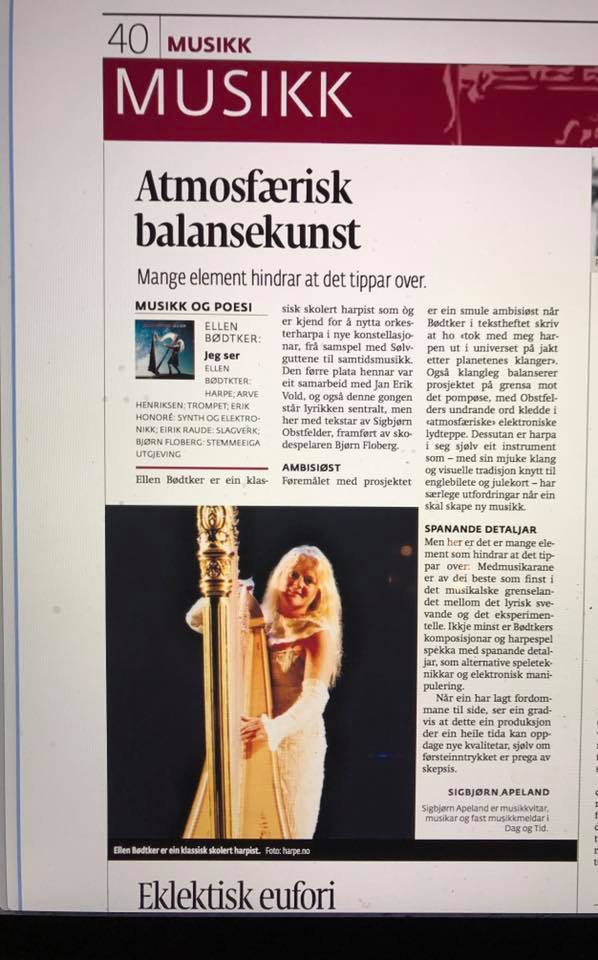 Ellen Bødtker is a classically schooled harpist who is known to use the orchestral harp in new constellations. From playing with Sølvguttene to contemporary music. Her last album was a collaboration with Jan Erik Vold. This album is equally focused on the lyrical aspect, with lyrics by Sigbjørn Obstfelder, performed by actor Bjørn Floberg.

Ambitious
The purpose of the project is a bit ambitious when Bødtker writes «I brought my harp to the universe, searching for the tune of the planets.»  The tonal aspect is bordering the pompous, with Obstfelder’s wondering words dressed in an atmospheric, electronic blanket of sound. The harp is in and of itself an instrument that – with its soft notes and visual imagery connected to angels – makes it particularly challenging when creating new music.

Interesting details
There’s a lot of elements that prevent the album from tipping. The collaborating musicians are among the best you find in the musical landscape between the lyrically flowing, and the experimental.  Bødterk’s harp and compositions are littered with interesting details like alternative techniques and electronic manipulations. Putting your prejudices aside, you gradually see that this is a production where you discover new qualities. 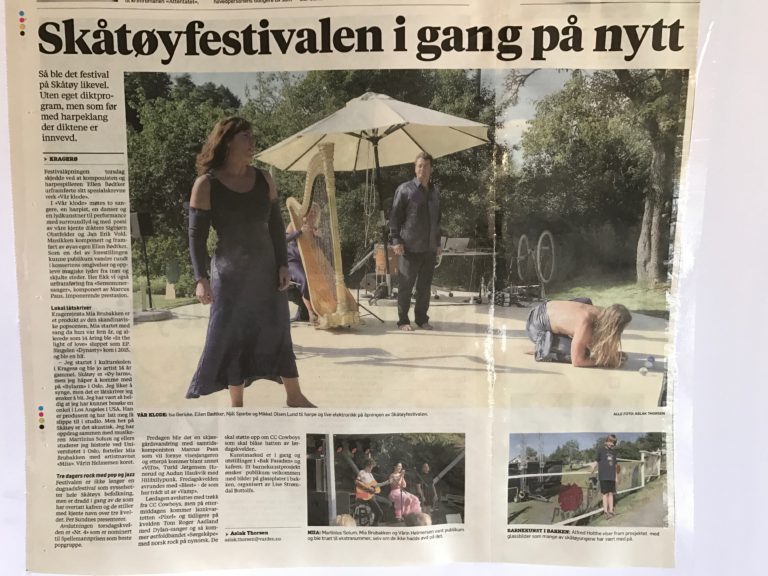 There will be a festival at Skåtøy this year after all. Without the poetry program, but as before with harp intertwined with poetry. 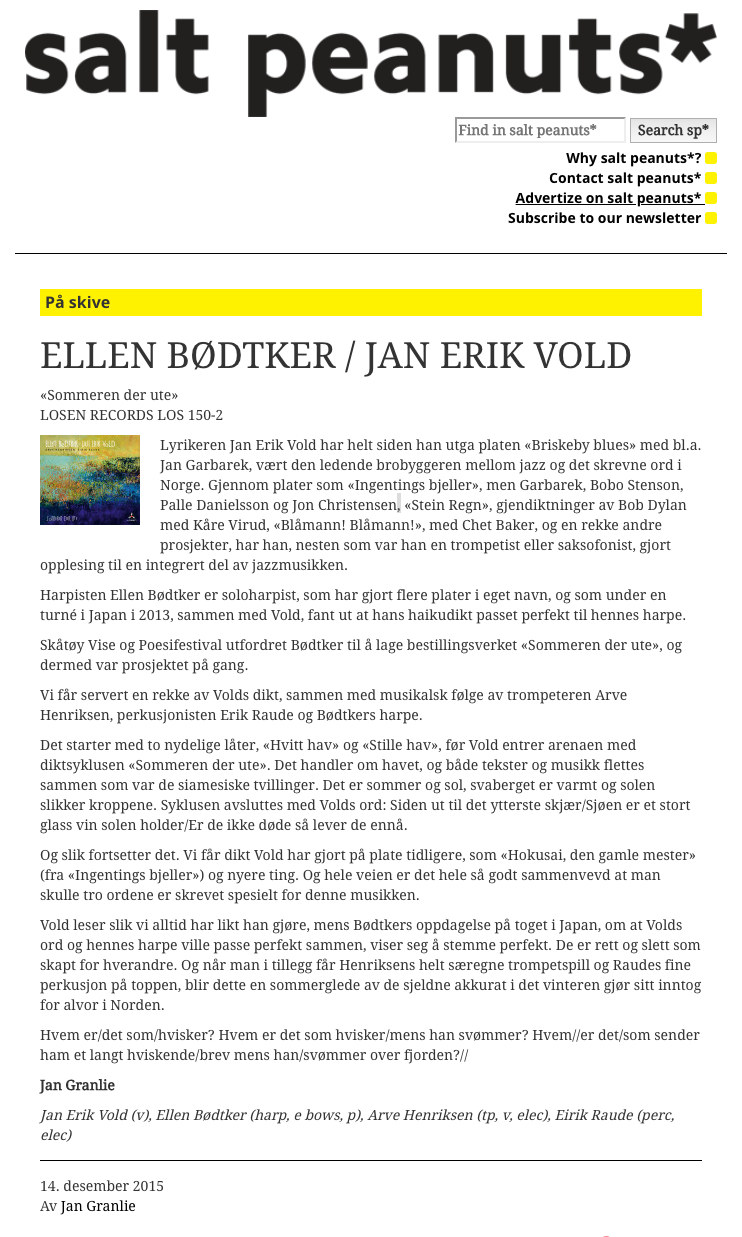 ELLEN BØDTKER/JAN ERIK VOLD  –  «Once Upon a Summer»

The lyricist Jan Erik Vold has since the album «Briskeby Blues» with among others Jan Garbarek, been building bridges between jazz and the written word. With records like «Ingentings bjeller» with Garbarek, Bobo Stenson, Pelle Danielson and Jon Christensen, «Stein Regn» retellings of Bob Dylan with Kåre Virud, «Blåmann! Blåmann!» with Chet Baker, and a series of other projects, he’s made recitation a part of jazz music.

Harpist Ellen Bødtker is a solo harpist with several albums to her name. During a tour of Japan in 2013 with Vold, they realized his haikus was a perfect match for her harp.

Skåtøy folk and poetry festival commissioned «Once Upon a Summer», and the project saw the light of day.

Starting beautifully with «white ocean» and «silent ocean», before Vold enters with the poem collection «Once Upon a Summer». Depicting the ocean, both music and lyrics merge as if they were conjoint twins. It’s a sunny summer,  the rocks are warm and the sun hits your body.

Vold reads like he usually does, while Bødtkers realization that his words and her harp fit perfectly together becomes clear. 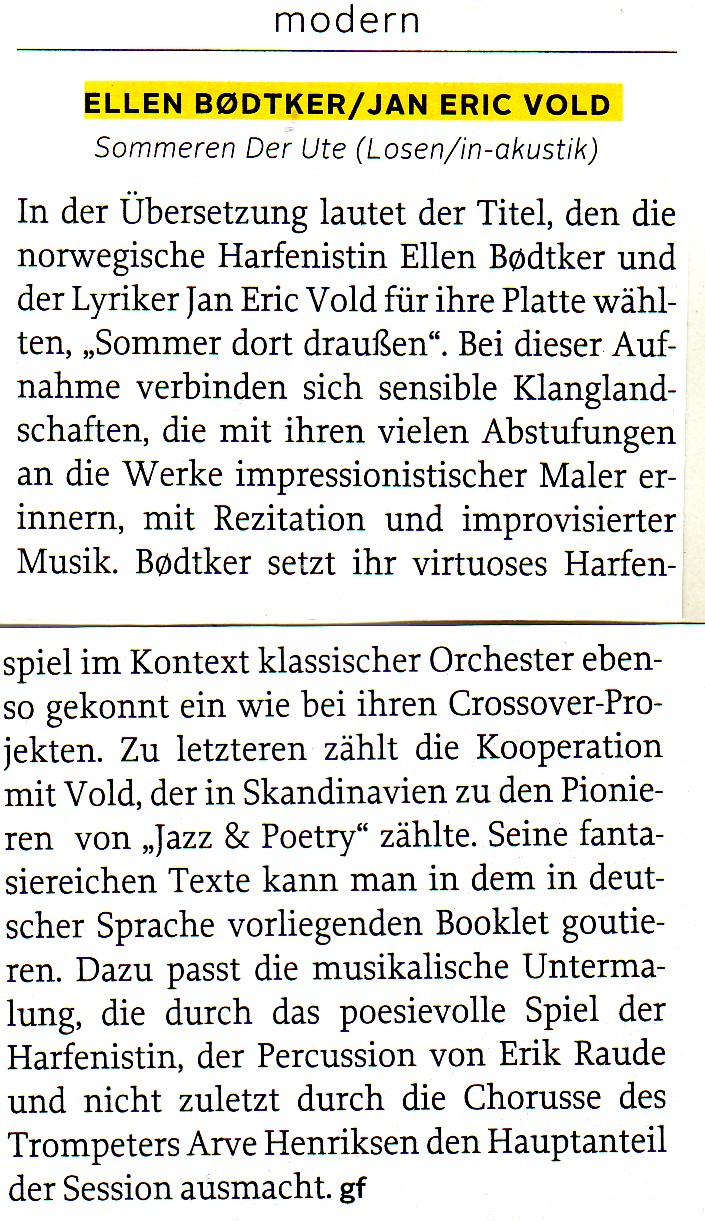